Gwen with her skills will be a strong late game carry even though she only has two clans. Mysterious gives the team magic resistance, and her mist will help reduce damage taken by allies by 50%.

It sounds like Gwen is a late game support champion replacing Kindred. However, the amount of damage that Gwen deals is quite large when her skills both deal great damage and can create adverse effects on the enemy. Either way, Gwen still has to have the right equipment and team to deal good damage in this late game.

At the start of battle, Gwen summons a Mist within 1 cell around her for 8 seconds. All allies take 50% less damage while they are in the fog. Trim Trim: Gwen dashes to her target and scissors 3 times rapidly in a cone in front of her, each slash dealing 125/175/777 magic damage plus 6/8/50% of the target’s max health. Also a scissor attack will remove 1 Armor and Magic Resist from the target. Every time she casts another move, Gwen will do twice as many scissors.

Location: Anywhere except the corner 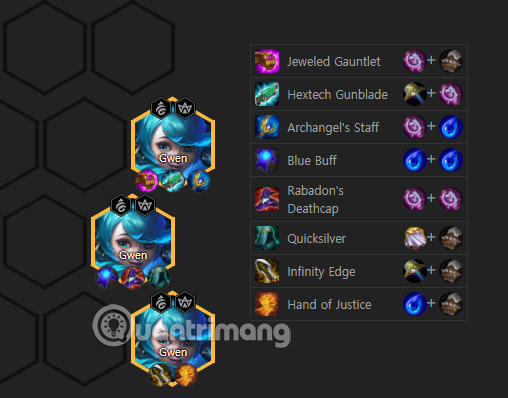 Just because Gwen is linked to the defensive clan does not mean that Gwen needs other healing or defensive items. Although you should prioritize her damage like Gem Gloves, Angel Scepter, Sorcerer’s Hat, Infinity Sword, Hand of Justice and Blue Amulet for quick cast.

In addition, healing or defensive equipment such as Alchemy Cloak and Hextech Gunblade will also be able to prolong Gwen’s life on the board. Please prioritize Oversized Sticks > Training Gloves > Tears > Sword BF for Gwen. 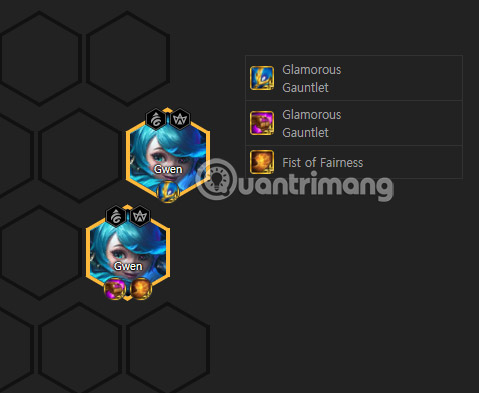 It is still the priority of the above damage items, but if you do not have a choice, you can choose to add defensive items or cause adverse effects to the enemy team. 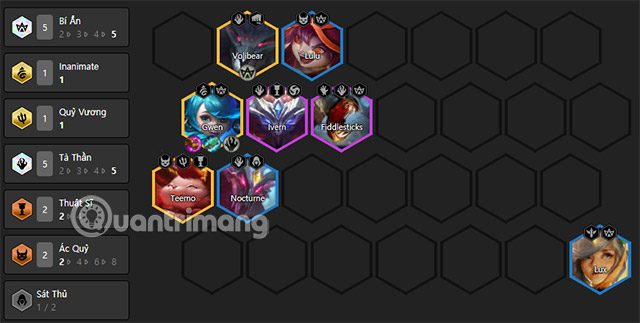 The most obvious link in this team is between Gwen and Fiddlesticks. Gwen invites Lux, Lulu to put up 4 Mysteries in the team. Fiddlesticks, then call Volibear, Nocturne, Ivern to add enough Mystery + Evil God. As for Teemo, he will be a guest with the Wizard + Demon and a damage champion next to Gwen.

This team will stand on the floor for a long time because of the magic resistance buff and the Evil Gods will be revived. However, it will cost a lot of money and must require the player to have a winning streak from the beginning of the game and win a lot of money to get to 8 in time and roll out high priced champions. The possibility of this team being TOP 1 is quite high if you have the Talisman or Mysterious Seal or both. 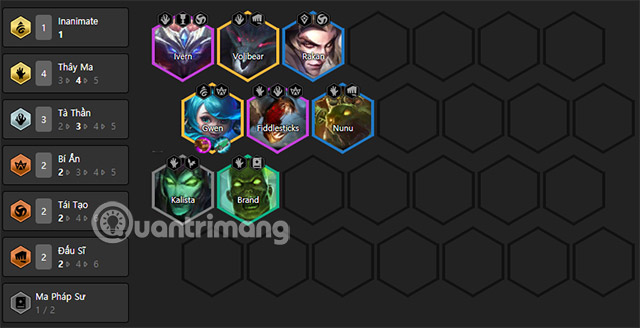 Zombies can be weak if the team doesn’t find the scarecrow and stuff for Sion later. However, the Zombie has the advantage of being able to rotate to many other squads with good clan linkage. However, if enough Zombies are gathered, this will be a great support for Gwen.

And you can still link with the Evil God to give Volibear, Fiddlesticks, Ivern more time on the floor. Rakan will be a champion that deals damage and supports recovery for the team. If there is a Zombie Seal, this is one thing that will increase the team’s ability to eat TOP 1. 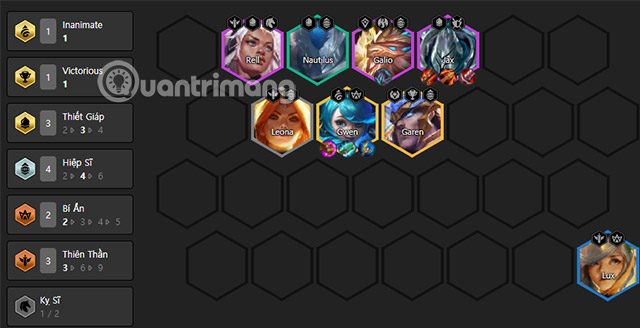 Also another defensive team for Gwen if you can’t find all 4 Mysteries. Armor adds armor to the whole team and Knights buff blocks damage to the team. Galio sucks damage for Nautilus and Rell to control.

Jax, Gwen, and Garen do damage, while Leona and Lux ​​take on defensive support.

Gwen can be linked with quite a few squads, and most importantly, she needs to defend with clan buffs and equipment to increase damage. Let’s build the team so that she will be the last piece to complete the team you have built from the beginning of the game until now.