In the past, Mages were originally a thin resistance force in their clan. But in this season 6, although few, we also have more tankers like Swain and especially Vex. With the nature of their skills, these are completely two effective tankers in the list of Teamfight Tactics – TFT wizards season 6.

The mage who supports the whole squad receives more magic power, so all champions will deal better damage in the team. However, you need to click more buffs to have the best AP for the Mages.

Therefore, the positions of support to resist and control will not be many. So let’s arrange the champions that deal damage and withstand together properly.

Malzahar, Ziggs, Lux will be good damage dealers. Vex and Swain will stand and endure. Viktor appears last depending on the situation, you can set him up as a secondary or main carry. Twisted Fate is simply a buff and early-game damage support champion.

How to build the Mage squad season 6 Teamfight Tactics – TFT

At the beginning of the game, let’s start simple, look for mage champions along with another tank like Blitz. If you win, continue to level 5 and add 4 mages.

Go to level 6 and gather what you think is necessary. In the middle of the game is the time when you have to get 4 Wizards, now Malzahar will be the main damage general and recruit more Poppy to stand in the tanker line.

These 6 Wizards are probably Vex who will hold the line to resist. Since there are 3 Yordles, it will be easier to get 3 stars for Vex. Ziggs and Lulu also get star boosts and if all three get 3 stars, this is also a significant source of support in the team.

Lux, Viktor, Malzahar will be the main sources of damage, Janna heals champions in the bottom row. Swain will add support for Vex on defense. The necessary equipment should be pushed to Lux and Malzahar. 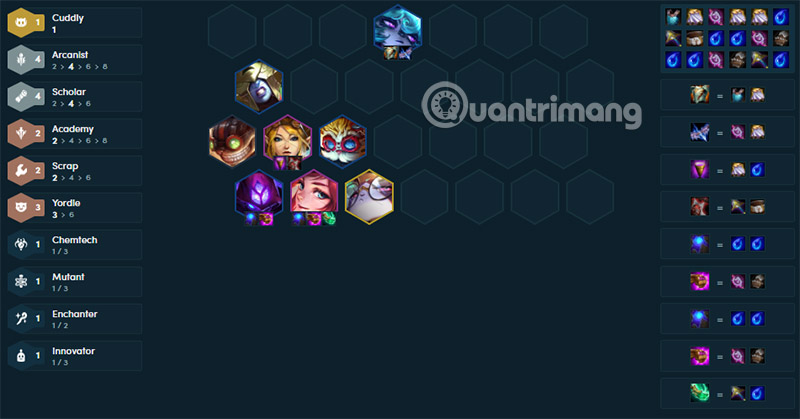 Lower AP is added but cast time is faster thanks to the Scholars. Although the tanker is currently only in charge of Vex. Before that, you should add 1-2 tank champions to the squad with Vex.

See more:  Details of the latest Play Together update

Lux and Malzahar will deal main damage, although 5 gold Viktor can do better damage late game but he has high mana. But with a weak tank formation as above, it is necessary to cast skills faster. So Lux and Malzahar dealing damage in this case is reasonable.