Many Windows-based applications, such as anti-virus software, inject code into Chrome to modify the application’s behavior. This leads to more frequent browser issues, so Google is working to fix it by preventing apps from injecting code into Chrome.

Why do some apps inject code into Chrome?

Some applications inject code into other running applications to modify the behavior of the injected application On Windows, this technique is called code injection, has been around for a long time and is used by many people. application types ranging from anti-malware tools to dangerous malware. This concept is also commonly referred to as DLL injection on Windows. 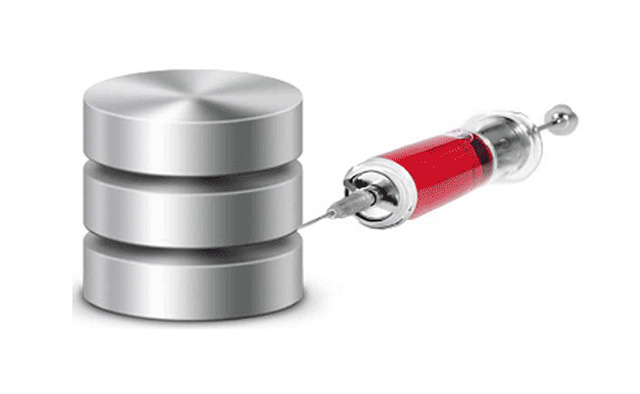 In other words, these apps inject code into Chrome to modify Chrome’s behavior. Assuming a security program wants to add some extra checks to Chrome’s browsing feature, or some malware might want to track your browsing, they’ll send codes to your Chrome .

Even if applications are using this code injection with good intentions, they can still cause problems for the browser because the code will interfere with Chrome’s code. Chrome developers don’t know exactly how these 3rd party codes will work. As Chrome developer, Chris H. Hamilton said: “These types of code injections are rampant on Windows platforms and cause significant problems with the maintenance of the stable operation of the browser. Chrome (crashes)”.

When will Chrome completely block these codes?

Google officially announced plans to prevent this phenomenon in November 2017. The technology giant also noted that Windows users with code injection software in Chrome will be at risk of encountering the above errors. Chrome is 15% higher than usual. Google says there are better prevention techniques for apps that require this type of code injection functionality, such as installing a Chrome browser extension that will use Chrome’s Native Messaging to communicate with another program on the system.

In its official announcement, Google also said that Chrome 69 will start blocking all code injections into Chrome from September 2018. However, according to testing, the beta version of Chrome 69 is currently only warning. warning about the possibility that 3rd party application code was sent to Chrome when your browser encountered a problem, but does not yet support code injection blocking. Chrome developers regularly test new features this way. In other words, they will roll out different features to different Chrome users to see how people respond, so it’s possible that some users have seen the same warnings right from the session. Chrome version 68.

Google has announced plans to block all code injections of apps starting January 2019. According to Hamilton, Google still plans to suppress these codes remotely, at which point the warnings will stop appearing. because Chrome will silently block any application’s code injection attempts. Microsoft Edge is the first browser on Windows to make these changes. Microsoft Edge has been blocked from code injection since 2015.

Even if Chrome gives you warnings about incompatible apps, it’s unlikely that these apps are the cause of the problem, unless your browser is at fault.

Mr. Hamilton noted that Chrome was merely issuing warnings about any software using code injection without providing “valuable reviews”. The software you have installed may still work correctly and not cause any problems, but Google simply doesn’t like code injection and is trying to block it.

How to check for incompatible apps

Alternatively, you can also access this list even before Chrome crashes by going to Menu > Settings > Advanced, scrolling to the bottom of the screen, and clicking “Update or remove incompatible apps” ” in the reset and clean section. If you don’t see this option here, there is no application on your system that is injecting code into Chrome.

(Note: This option has only been available since Chrome 69. Chrome 69 stable is scheduled to be released on September 4, 2018). 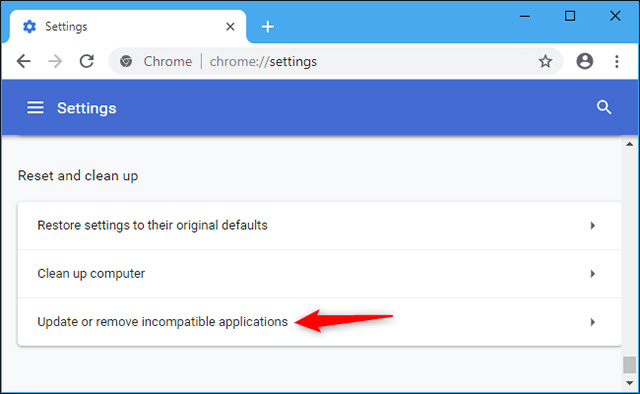 Chrome will list all the apps that use the code injection feature that you have installed. There will be many antivirus applications, including Avast, AVG, Bitdefender, Emsisoft, Eset, IObit, Norton Security, Malwarebytes, and WinPatrol appearing on this list. Other apps that will also appear on this list include Acronis True Image, Dropbox, and RocketDock. Overall this list may come as a surprise to many, but any application that uses code injection will appear on the list. 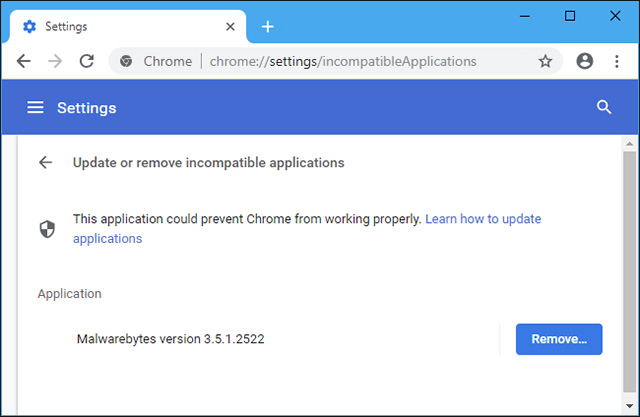 Knot “Remove” next to each app will take you to the Settings or Control Panel window, where you can uninstall these apps if you want.

If you don’t have any issues with Chrome, you don’t even need to uninstall the apps on the list, anyway Google will block the code injection feature of that app after a few months. 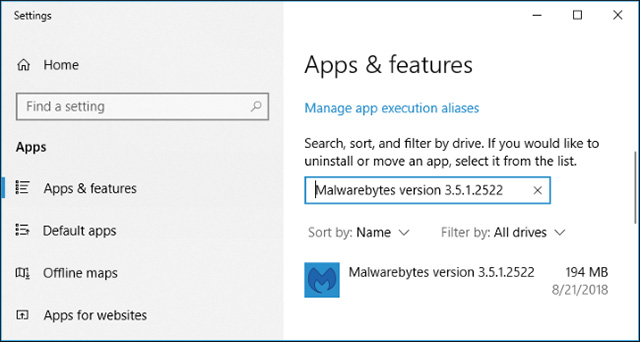 Google is clearly hoping that application developers will update their applications to no longer depend on code injection techniques. After all, developers certainly don’t want Chrome to encourage people to uninstall their apps. Either way, these errors won’t last long.

However, removing software that uses code injection is probably not a big loss. As the Chrome developers have said, code injection contributes to crashes, and it’s best not to have a lot of problems in your browser.